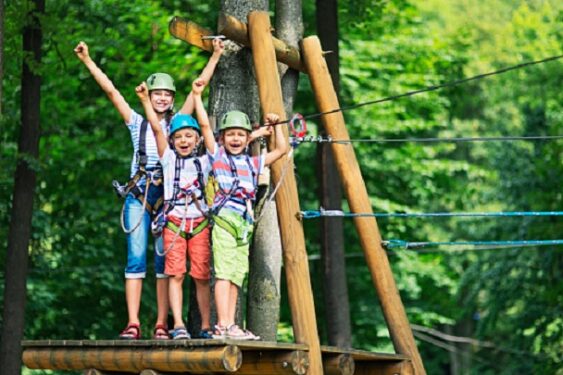 When the weather begins to warm up and the sun starts to light up the summer break, getting the kids outdoors and keeping them busy is key to an entertaining day out. Melbourne, with its wide-open parks and wildlife, is a perfect place for children to play. One of the main reasons that makes the city and its suburbs so fun for kids is the many adventure playgrounds dotted around Melbourne. There’re many playgrounds available for kids to use, but we’re here to select the cream of the crop and provide the best adventure playgrounds in Melbourne.

Starting off with the best, there’s not much that can beat Kinglake’s Bollygum Park. Built after the horrific Black Saturday bushfires that desolated Kinglake back in 2009, the constructed park quickly gained plenty of interest, winning the 2014 Kid Safe National Playground Award. Based off the 1994 children’s book Bollygum, the playground is full of net swings, slides, wooden climbing frames, sand pits, bridges and plenty more. The best feature of Bollygum Park is the little touches – while community markets are held on the grounds and there are amphitheatres and facilities for family activities, the intricacies of carvings, stone pages and various signs designed to describe various parts of the playground make for a mind-blowing adventure park like no other.

Built in 1995 as a community project, the Eltham North Adventure Playground has been re-completed in recent years to become even larger and more impressive than ever. The main structure is a massive wool shed that houses an expansive wooden playground that twists and winds around magnificently. After being destroyed by fire in late 2017, the locals wanted the playground to be built as a replica of the previous design. They got their wish, and the adventure playground is back better than ever, and still only a 10-minute walk away from the popular Edendale Community Farm. Beyond the shed, flying foxes, sandpits, swings and water play troughs continue to entertain the many local kids who swarm to the eye-catching playground.

While the previous two playgrounds were wonderful sprawling wooden designs, the Ron Barassi Snr Park is completely different. Full of new age looking grey playgrounds that shoot up high into the sky, you can see the adventure playground as you round Docklands Drive due to the high climbing fort and big slides that curl off it. The usual play areas of sand pits, water troughs and climbing apparatuses are present at the space near the Bolte Bridge and Melbourne Star, but as you get closer, you’ll see stepping stone sand bags and a variety of native plants that surround the impressive adventure park.

Previously named the best playground in Australia, the Royal Park adventure playground is a wonderful sight that sprawls across the former Children’s Hospital space. Rocky terraces, swings, slides and climbing ropes will tire children out easily, while the massive space allows for two separate play areas. The lower play area has heaps of climbing structures and sandpits, while the upper space boasts rope obstacle courses and four big slides. Natural play areas and great views of the city from near the Royal Children’s Hospital makes for a beautiful space that will entertain kids for years to come.

Developed by the local Nillumbik council, the Diamond Creek adventure playground won the ‘Best Playspace less than $500,000’ in 2021, such is the ingenuity in its design. The nature-themed playground caters for children of all ages and ability, as junior and senior play areas ensure the flying foxes, cubby areas and swings are all safe and thrilling for a wide range of kids. Right near the Tram Café, which sits in the middle of the space in a restored tram cart, and a variety of facilities that encourage a family day out, the playground is ahead of its time. A labyrinth zone for walking exercises and meditation suits both children and parents, the playground is designed for the entire family.

If you’re looking to cool down in the hot summer heat, look no further than this wild water park in Wallan. Otherwise known as the Community Bank Adventure Playground at Hadfield Park, this newly built Splash Park also has a five storey wooden climbing fort, swings, a flying fox and a water area. Pack bathers before you go, as the Splash Park, which is open between 10AM and 8PM in the summer months, is a crazy addition to an already amazing adventure playground.

Set inside the beautiful grounds at the Royal Botanic Garden, the Ian Potter Foundation Children’s Garden is a creative fenced-off playground that taps into the rich environment around it. Known as one of the best parks for babies, it is also wonderfully suited to kids of all ages, such is the diversity in play equipment present. Plants, water structures and pathways resemble Melbourne perfectly, and are used to create challenging playgrounds for kids of all abilities. Don’t forget bathers or a change of clothes in the warmer heat, as fountains switch on in the summer to ensure no one overheats. The Island is the best obstacle there, while the hidden nooks and crannies in the playground makes for hours of fun.

This maritime themed playground in Port Melbourne is filled with recycled maritime equipment, and is put together to create one striking adventure playspace. A new wooden climbing structure and long slide coming from its top finishes this action-filled playground that is sure to thrill kids of all ages. Near Sandridge Beach, repurposed channel markers become fort buoys for kids to climb all over, while old rail lines and shipping containers are creatively used to produce this playground. Two water play areas are perfect for warmer weather, while outdoor fitness equipment and nearby boardwalks mean the playground is set for all ages and for those looking to exercise.

This vast nature-based playground suits all ages and abilities for kids. Beautiful mosaics of turtles and yabbies surround the equipment, which is full of many different features connected by flat track paths. A changing places toilet is there to cater for people with higher support needs, as the playground is very inclusive for all children. Just off Waverley Road, Jells Park has been updated to hold many new features like trampolines and floating rocks on its massive grounds. With up to three separate playgrounds combining to make this mammoth playscape, the open space and features make it a suitable piece of entertainment for all kids.

Designed like a mini village, this unique playground is complete with little libraries, fire stations and play equipment for kids to run around all day. A rope pyramid structure encourages climbing and exploring, while rope bridges connect playgrounds to BBQ areas for the whole family to enjoy. This playground is huge, and the model community around it replicates Montrose perfectly. Be careful for the lack of sun shade, but the many great playgrounds and the beautiful artistic design makes this Montrose playground a worthwhile visit.

This wooden fort style playground holds ten separate swings and a variety of little wooden nooks to explore. The Phoenix Park Café is right next to the grounds, creating a great community feel across the grounds. The gated playground is definitely the main attraction though – its hut-like structures create a heavenly wooden playground for kids to run around. Grassy skate ramps, a community library and BBQ areas complete the deal for this family space, the castle-like structure is also cleverly designed so that there is only one point of entry and exit, so parents don’t have to stress about losing their kids.